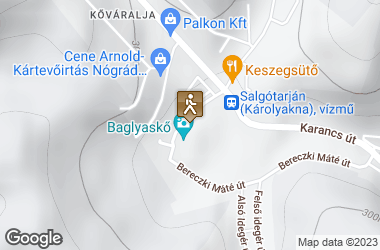 One of the best studiable diatremes in the territory of Novohrad-Nógrád Geopark is Baglyaskő. It may be 3.54 to 3.84 million years old.

Its debris rampart, which was formed during the volcano's phreatomagmatic activity, has eroded and the breccia formed in the magma canal has got to the surface. The diatreme was broken through by a basalt vein, creating syngenetic caverns. One of them is a mud-bag, in whose walls a duct carrying hydrothermal solutions can be recognized (G60). Baglyas-kő is a small rock and it is only 70-90 m in diameter, rising as a cone at first and then with steep walls as high as 301 m out of its environment, the height of which ranges between 270-275 m. The eruption started with clast-scatter, and then the lava came up through a cylindrical chimney within the basalt tuff that had already consolidated, and formed a smaller cone. It is so much eroded, that only the stock of the crater has remained. The so-called “Karoly-shaft” which stretches underneath the Baglyas-kő revealed a basalt-peduncle breaking through coal beds, infilling of the former chimney, which turned coal into coke at the contact points. (JUGOVICS 1942) The cave can be found in the south side of the steep rock, at 285 m above sea level. What is called today as Baglyas-kői Basalt Hole, actually, is not a single hole, but a system formed by three holes right next to each other (obviously a genetic unit). The most striking thing is a lower horizontal corridor. It opens from a 3.5 m high and 2.5 m wide mouth, but after 2 m it shrinks into a 1-1.2 m high and 1.5 m wide corridor that can be passed only crouching down. It leads as far as 7.3 m with a further shrinking width and reducing height, to the direction of 355°. Its side-walls and vault consist of dark grey basalt at the entrance, and further inside, of scoria basalt; its floor is covered with a thin layer of clast. The inner and bigger part of the corridor looks artificial, but maybe it is just the former tight cave was enlarged. A shaft leading downwards form the passage at the mouth makes up the second part of the system. It has a long oval cross section with a long axis of 2.3 m and a small of 80 cm. The direction of the longer axis is the same as that of the corridor. The shaft is of 2 m deep at present, but there is some clast on its floor which seems to be thick, so its original depth must be a lot more than that. It walls are composed of dark grey compacted basalt. The third line of the system is situated 4 m higher and 2 m further east (to the right) than the bottom of the mouth. It is a “tube” with a 40 × 40 semicircular cross section, 2.40 m long and leading towards the north; it can be passed only crawling. It has scoria basalt walls and a clastic floor. This system of holes including the three branches described above, has a total length of 12.70 m. No special equipment is needed for exploring. Early scientists’ had different opinions on its formation. OZORAY (1957: 1960) describes it as a gaseous or phreatic explosion pipe, SZENTES (1971) says it is a tectonic cavity, BERTALAN (1958) considers, it is a cavity of tectonic origin, but later was modified by post-volcanic effects. Although not only the corridor and the shaft have the same the direction, but it is the same as that of the lava break-through and the fault on the top, but this formation cannot be considered as a result of real tectonism. The direction of 175° - 355° is marked by a compact dark grey basalt dike that subsequently forced open the reddish basalt which got solidified earlier with scoria, and here, on the surface of this border, a phenomenon similar to tectonic fault occurs. The shaft in cave was primarily formed by gaseous or phreatic explosion breaking out on the surface of this dike, and the horizontal corridors as well, the lower of which was also enlarged artificially. No real formations can be seen in the cave, apart from mineral crystals of the host rock and some inclusions that come from the base rock, and in the walls of the passage. These are half a cm big olivine and augite lumps, some sizeable pieces of oligoclase-feldspar and quartz and sandstone inclusions in the basalt. The cave is dry, dusty – and due to its southern aspect, it is warm fairly light. We could not discover any living creatures in it. From the footprints in front of and inside the cave, it may be deduced that many people, especially kids or teenagers visit the cave. (Its mouth faces a gipsy colony which is at the foot of the hill.) If the clast was removed from the cave, not only its size would increase, but it would supply some further information about its genetics.

05/12/2018 6:46 AM
ANNA CAVE
The Anna cave, managed by the Bükk National Park Directorate, can be found near the waterfall in Lillafüred. Only a few of the kind can be visited in the whole world: in 1951 it was declared protected, then in 1982 a strictly protected area.
Read more